Home » Home Design » Foundation plan: essential not only for a house building

Foundation plan: essential not only for a house building 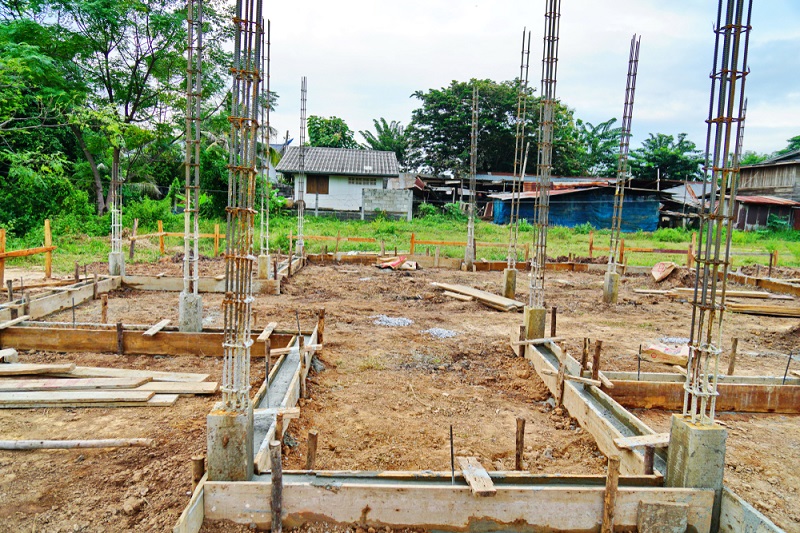 Create foundation plan: own contribution or not?

There are ambitious builders who are quite confident in the preparation of the foundation plan. But these builders should be said that it is always better to trust the professional in building a house. The architect carries out the planning of the foundation in the entire house planning.

Whereby it is not even the architect, but the structural engineer, who sets the exact planning. He has to calculate at which point in the house which loads will lie, what has to be intercepted and how great the load for the concrete foundation will be.

Since a structural engineer must be called in anyway during the house planning, the foundation planning does not even represent an expensive additional service. A fear, which many builders carry in themselves and therefore want to do as much as possible themselves. But just the foundation must fit, it represents the feet of the house, so to speak.

Therefore, no builder should make the concreting of the floor slab on their own, especially since all own services can lead to problems or even to the exclusion of the warranty by the trades.

The reinforcement specified by the structural engineer must be adhered to during construction. The following are included in this plan:

Not only the new family home should be on safe feet, the garage or other outbuildings are usually built on a foundation. The reinforcement also ensures that the walls are safe and that the entire load is secured. Vertical and horizontal loads are distributed. It is also important to catch any settlements with the foundation.

If you move into a newly built building, you may notice in part how the floor slab lowers. Above all, the acrylic edges on tile transitions between floor and wall tear, often cause large gaps in between. Also on vertical edges can be observed that, for example, a wallpaper warps. These are signs of a sinking bottom plate, which usually does not sink evenly throughout the house.

Therefore, the dimensioning of the reinforcement in the foundation plan, which is based on the calculated bearing capacity of the soil, is important. This is the only way to ensure that the load-bearing walls really are such and do not give way unanticipated.

This is mainly used under load-bearing walls. The strip foundation is composed of excavated foundation strips and a formwork, which is set up to the lower edge of the bottom plate. Conventional formworks as well as special foundation formworks are used.

Important: If it concerns a boundary development, as it often occurs, for example, in outbuildings such as the garage or the subsequent extension as an extension of the house, the strip foundation may not affect the adjacent property. For example, there are angular foundations that still bring the building to safe ground.

slabs Foundation slabs are also referred to as surface foundations and are easier to handle in that no formwork or excavation work is required. The floor panels are much thicker here and must be executed with a reinforcement. Overall, foundation plates are often cheaper than strip foundation and distribute the loads better thanother types of foundations. This is especially true for problematic soil conditions such as loose sand or a sand-clay mixture that reacts differently to wet and dry.

For single foundations no formwork anchors are installed in the lower area, this would complicate a later expansion. Instead, belt tensioners are embedded in the concrete, the bracing in the upper area is carried out using the foundation formwork.

Foundation plan for garden shed and garage: specifications from the manufacturer

In the foundation plan, the dimensions of the necessary foundation are specified, and it is also clear where the base plate has to be applied. Based on the illustrations, the foundation is excavated, which is best done with a mini excavator.

The foundation plan basically shows nothing but many different trenches. They wind along the perimeter walls and show the places where load-bearing walls will be found. These trenches are dug after preparing the construction site for the floor slab.

Important: The walls of the trenches must be really solid, otherwise there is a danger of collapse. It may be useful to make these trenches more stable with boards. The trenches will later be filled with concrete, thus forming the basis for the concrete foundation.

The upper edges are later smoothed out, as long as the concrete is still soft and malleable. After a few days, the bottom plate can now be created, which is also done with concrete.

That’s why the foundation plan is important

Many property owners who only want to build a garage or build a house without a basement ask themselves if it is really necessary to have a foundation plan drawn. After all, it costs additional money and in a construction that is smaller and thus less difficult, a simple concrete foundation without a precise plan but enough. Or not?

As a rule of thumb, the floor space of the building may not exceed five square meters, so no foundation plan is necessary. Loads but heavy weights on the bottom plate and creates a massive building, the plan is important.

It records all relevant data, shows which reinforcement has to be in which position and what quality of the concrete is needed to give the whole building the right footing. Also, the strength of the bottom plate is called here.

In the case of a strip foundation, the correct positions of the strips are mentioned in the foundation plan, so that these can also be retrieved later.

Important: The foundation plan must also be implemented during construction. It is not enough to build a base plate “roughly” and to hope that this will have no consequences.

However, a foundation plan is of course not available free of charge, the structural engineer usually calculates its performance extensively. Nevertheless, this is a good investment as it provides more planning security and the high quality of construction required.

However, the total cost of the floor slab and the foundation plan can vary widely and depend, among other things, on the area on which the building is to be erected.

The approximate clue is a building of 85 square meters of floor space, for which a 25 cm thick floor slab must be built. As approximate costs are between 80 and 85 euros per square meter, which amounts to a sum of 6800 to 7225 euros. In these costs, the fees for the structural engineers and the fee for the architects are also included as the material and craft costs.